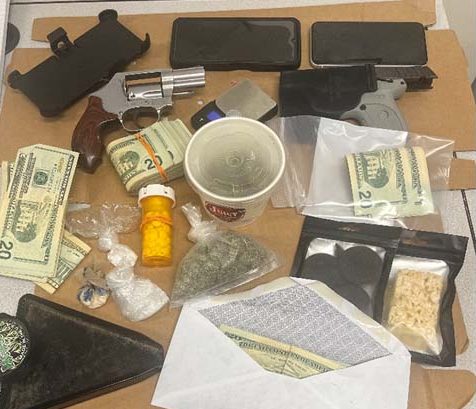 BATESVILLE, Ind. (INAS) — According to Indiana State Police, four dependents were taken into custody by the Indiana Child Protective Services as a consequence of the investigation and two people were detained during a traffic stop on Interstate 74 on Saturday afternoon.

The inquiry got on just before 1:00 p.m. when a trooper pulled over a GMC Acadia for a traffic infraction on I-74 eastbound close to milepost 151, east of Batesville.

Located about an hour’s drive southeast of Indianapolis, Batesville is located along I-74.

According to authorities, the trooper saw indications of illicit behavior while chatting to the car’s passengers, including the smell of marijuana coming from it.

Troopers searched the car and discovered two weapons, marijuana, various illicit substances and drugs (pills), around 20 grams of probable crystal methamphetamine, and about $3,700 in cash.

Dashawn Powell Jr., 28, of South Bend and Kenya Hamilton, 27, of Indianapolis, the vehicle’s drivers, were detained on a number of felony and misdemeanor charges relating to the distribution and possession of methamphetamine, marijuana, controlled substances, and legend drugs, according to the police.

Powell was also detained on suspicion of having a weapon in his possession as a major violent criminal.

Powell and Hamilton were also both detained on suspicion of neglecting a dependent. Four young children in the automobile were taken into custody by the Indiana Child Protection Services.